Lots of people have asked me about my collection of cockerels, mentioned in a previous blog. This famous, vividly coloured cockerel, is the unofficial symbol of Portugal and varieties can be bought at souvenir shops everywhere in Portugal. It originated from Barcelos, the town in North Portugal, where the souvenirs are manufactured. Its proper name is ‘The Barcelos Rooster,’ and relates to a centuries old legend which revolves around a dead rooster that crows to prove an accused man’s innocence.

The strident, proud and splendid rooster is much loved by the Portuguese, reminiscent of Portugal’s historical importance, their culture and unique character. The coastline is breathtaking and charming- thankfully, the country is enjoying further success as a tourist destination, though partly at the expense of Egypt and Tunisia.

There are several versions of the legend, here is one, taken from a postcard: ‘At a banquet given by a rich landowner in Barcelos, a valuable piece of silver was stolen and one of guests was accused of the theft. He was tried by the court and was found guilty. In spite of the overwhelming evidence against him, he still protested his innocence. The magistrate granted the man a final chance to prove his case. Seeing a cock in a basket nearby he said, “If I am innocent, the cock will crow.” The cock crowed and the prisoner was allowed to go free.’ 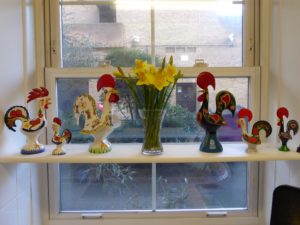